If you were arrested by an officer with the Hoover Police Department, Hoover Alabama, you Hoover Court case will also be in the same city court. Over 95% of all Hoover Alabama police arrests are made by officers of the City of Hoover Alabama Police department, and not the Alabama State Patrol.

Initially, the first court appearance for Hoover Police Department arrests is in the same building as the records department of the Hoover Police records Department, Valleydale Road. Our firm does not handle divorce or family law, nut opts to limit our types of accepted cases. 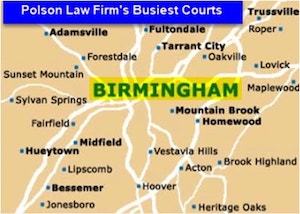 A DUI arrest, and the frightening experience of not being in control of your freedom shocks most people. Those who MUST keep an Alabama DUI-DWI off their record need the services of experienced and successful criminal attorneys near me.

Do not delay receiving a FREE consultation with our attorneys near me. Call today at (205) 871-8838 to consult with a 24-hour lawyer. Since the free lawyer consultation costs nothing, what do you have to lose?

You need an end to worrying about a potential conviction and uncertain fate that could derail your future. You must assure that the case is properly handled in the Hoover Municipal Court AL to obtain the optimal outcome. See some Polson case results.

The Best DUI Lawyer in Alabama for Hoover Traffic Court

The two partners at Polson & Polson represent clients zealously and aggressively, to obtain the best outcome for every client facing DUI charges in the Municipal Court of Hoover Alabama. An individual accused of a D.U.I. offense needs legal counsel experienced in Hoover criminal cases. The potential penalties from a DUI conviction can devastate a person's career.

The State of Alabama is an implied consent state. This means that that if an arrested DUI suspect refuses to submit to a chemical test, he or she suffers an automatic loss of driving privileges. This test is collected with a post-arrest breathalyzer test of your deep lung air, or by blood extraction (for drugs).

An implied consent test (under Alabama DUI laws) can be demanded by a Hoover police officer under authority of his or her law enforcement agency. Alcohol testing is collected to determine the arrested driver's blood alcohol content (BAC), as close to the time of driving as possible.

An implied consent test refusal causes automatic suspension for 90 days. If this is a second offense, the driver's license will be revoked for a full year. Our DUI lawyers, Hoover Al are here to help you avoid or mitigate that harmful event, but you need to call us ASAP, within 10 days of the arrest. 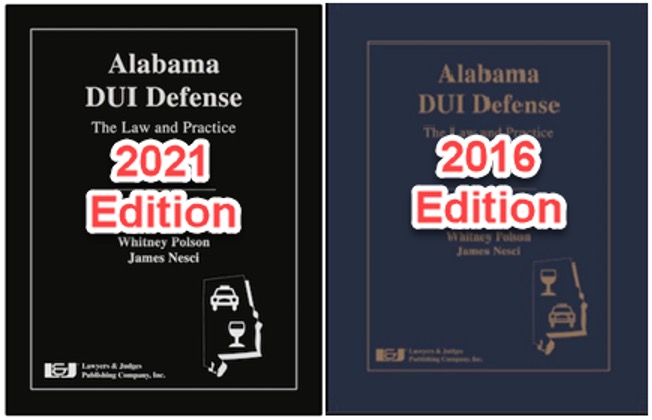 Criminal Defense Attorney Whitney Polson is one of the co-authors of the leading book on the legal issues relating to Alabama DUI laws. This is his most dominant practice area, but he also handles other misdemeanor or felony criminal cases, and personal injury. The Polson law office is in the same county as Hoover, Alabama, do our DUI lawyers near me in Hoover Al can cover any cases in this court.

This may also limit possibilities at reducing penalties by requesting a hearing to challenge the sentencing or to get a restricted license. A restricted driver's license is a situation where an ignition interlock device is installed in the client's vehicle so that the driver must blow a BAC of 0.02% or less in an ignition interlock breath test to start the car.

The penalties for a DUI in Alabama are controlled by many factors, including the BAC level, other traffic law violations in the current arrest, and whether this is a first offense. Potential penalties for DUI offenses in Alabama (if convicted) are as follows:

The consequences for a DUI conviction are serious. For many successful individuals, a conviction could have a lasting impact on that person's life and career. That is why you entrust the case to an experienced Hoover DUI lawyer with a sterling track record. You want a legal warrior to fight a DUI or at least mitigate the sentencing in a DUI case.

The Importance of Hiring a Top-Rated Hoover DUI Lawyer

A suspended or revoked license, fines and jail time are all possible punishments for a DUI conviction in addition to the strain placed on relationships with family and friends. For some, successfully completing the DUI diversion program in Hoover, Alabama can provide a plea alternative. This revised law was updated in the Alabama DUI laws 2019.

If you find yourself charged with a DUI offense, you will need a lawyer with the experience and dedication to fight for you and defend your rights. Contact our skilled Hoover DUI attorneys near me today to schedule your initial consultation.

Normal operations for Hoover Municipal Court hours are 8 AM to 5 PM, CST.

The hiring of legal counsel for a Hoover traffic ticket is an important decision that should not be based solely upon advertisements.