By: Mark Polson, Alabama Drug Crimes Lawyer for Over 45 years

Drug crimes in the state of Alabama are punished severely. Our State legislature has enacted laws in Alabama that impose mandatory minimum sentences for certain drug offenders under several different Alabama drug laws. Some laws pertain to unlawful possession or prescription drugs, such as not carrying them in the proper containers.

Depending on both the type of controlled substance and the quantity of that substance found, for a drug possession charge, an individual can face a wide array of potential consequences for an Alabama drug conviction. A violation of Alabama law for transporting, selling (dealing) or possessing certain contraband drugs can alter a person's future.

Due to the severity of Alabama drug penalties, it is wise for anyone facing such a charge contact an experienced attorney immediately. A knowledgeable drug lawyer will be able to build a strong defense to assist in lessening any potential penalties you may be facing. 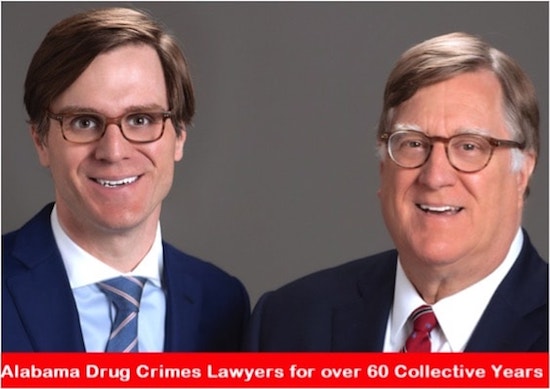 Drug-related offenses in Alabama have a wide range of penalties depending on the type of charge. One common type of charge is a misdemeanor offense, which carries a fine of up to $6,000 and up to one year of jail time to be served in a city jail or county jail. Offenses such as possession of drug paraphernalia and marijuana in the second degree fall under this category.

However, a drug offense in Alabama may be classified as a felony, which carries much more significant penalties. Examples of this include possession of a controlled substance such as cocaine, heroin, methamphetamine, and prescription medications. In these cases, a person faces a minimum sentence of one year and a day, up to 10 years in state penitentiary, and up to a $15,000 fine.

For drug distribution cases, faces a minimum of two years to a 20-year sentence, and drug trafficking charges carry a minimum mandatory of three years, which can be increased to 25 or life depending on the quantities involved.

In Alabama, not all drugs are necessarily prosecuted. The quantity of the drug found increases the range of Alabama drug penalties more so than the classification of the drug itself. A person commits the crime of unlawful possession of an intent to distribute a controlled substance if they have a possession of between eight and 28 grams of cocaine, more than four grams of heroin, and any amphetamines up to 28 grams. Depending on the quantity of the drug, the penalties can vary in harshness in Alabama. Even possession of marijuana is prosecuted with all the resources of the district attorney’s office.

The biggest short-term penalty in an Alabama drug case is incarceration. This is until the individual is able to make bond and be released. Once released, many courts, as a condition of bond, would place that individual on some kind of restriction or some kind of “color code,” which is random drug and alcohol screening. This condition can usually be lifted by a knowledgeable attorney, but this is an immediate problem that somebody faces when charged with a drug-type offense in Alabama.

Lifelong Penalties for Distribution and Trafficking

Compare this to simple marijuana possession, which is only a class A misdemeanor, and probation would be a likely outcome if convicted. However, more times than not, these types of cases can be dismissed in drug court.

Every cocaine case is a Class C felony. In cocaine possession cases, 28-500 grams requires a minimum of three (3) years in state prison, plus a $50,000 fine, if convicted.

Drug Convictions Stay on Your Background Record for Life

Initially, in Alabama, an individual’s record of arrest would be the first thing impacted. However, if the case is defended successfully and dismissed, there is a way to expunge and clean up that very history.

How Can an Alabama Drug Lawyer Help Me?

A person facing a drug charge in Alabama should always contact an attorney and should do so immediately. In Alabama, felony drug offenses will begin in the district court. In district court, it is not a determination of an individual’s guilt or innocence, but rather whether there was probable cause for the arrest warrant or arrest to have been made.

As with any drug charge in Alabama, a person faces very significant consequences such as employment issues, loss of driver’s license, high fines, and imprisonment, so it is very important to contact a lawyer immediately. An individual will want to begin minimizing any Alabama drug penalties as soon as they possibly can.

Call today to (205) 871-8838 to speak with a partner at the Polson Law Firm anytime day or night. My son, Whitney Polson and I run the law firm, and have in excess of a collective 60 years as a criminal defense attorney.

A FREE consultation is available. The quality of legal services at Polson Law Firm will be superb. While Birmingham Alabama is where our main office is located, we cover the entire state of Alabama.