Law Firms in Birmingham AL: DUI Lawyers Near Me

In fact, if you know good civil attorneys near me (like a personal injury lawyer Birmingham) that are with Birmingham law firms, and can trust them to let your call remain confidential, ask them about our attorneys in Birmingham, AL.

Because about 1 or 2 of every 10 drunk driving cases involve some sort of car accident. Thus, many of our criminal cases involving impaired driving also have a related personal injury case that may be proceeding at the same time.

Many times, our legal practitioners must communicate with a civil attorney Birmingham AL who is with our client's insurance company defense law office. This will be the person responding to the personal injury attorney for the driver of the other vehicle or vehicles in our client's car crash or motorcycle accident since that is his or her job.

Our two AL lawyers for DUI near me bring 65 years of legal services in representing those arrested in the State of Alabama on criminal charges. Both of our Birmingham lawyers are known as impaired driving defense attorneys but are also known as legal book authors on the topic of Alabama DUI defense.

This article is intended to answer some basic Alabama DUI questions. Plus, it also provides links to other pages within our website that are routinely searched by prospective clients.

Multiple factors can be the lynchpin for finding a non-DUI disposition in a driving while intoxicated case. This maxim is true in every state and is largely influenced by state DUI laws (or DWI laws) in that State. 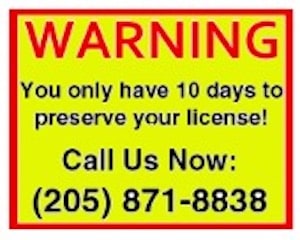 A Word of Caution: One of the traps for the unwary citizen arrested for DUI in AL is the need to immediately retain legal counsel to protect your right to drive. Under Alabama's implied consent laws, those who refused post-arrest testing risk a painful, lengthy administrative license suspension if they fail to file an appeal within 10 days after arrest.

Some of our questions are expected by our clients. Issues like whether you took the voluntary field sobriety tests is one common inquiry. Another may delve into the quality your medical treatment (during police custody) after a DUI-related accident, to see if you may need to be referred to a medical malpractice attorney.

Our legal team will gather quite a bit of information about you, your job and your family, in order to ready to leverage any favorable factors in negotiations with prosecutors. When we ask about prior military service, or your educational background or your employment duties, it is all for a purpose.

Additionally, if you were involved in a collision of any type, we want to know if that occurred due to someone else's negligence. Our interest in whether you drive a company vehicle or have a CDL license is because those vehicles cannot typically be equipped with an ignition interlock device as part of our criminal defense lawyer's effort to find a non-DUI solution to your pending case.

Who are the Local Legal Services Professionals at Polson Law Firm?

Jefferson County AL criminal law attorney Mark Polson’s 47 years of asserting creative DUI defenses has placed the Alabama DUI attorney at the pinnacle of most lists of the Best Lawyers in Alabama. These lawyer ratings were earned by handling many highly publicized criminal law cases in his nearly half century or criminal defense work.

Both litigation professionals are proud members of NCDD.com, or the National College for DUI Defense. This non-profit is the largest membership organization for DWI-DUI defense in the United States.

Mark's son, Whitney Polson, co-authored the book “Alabama DUI Defense” in 2016. It deals with both the law and the science behind Alabama DUI arrests. 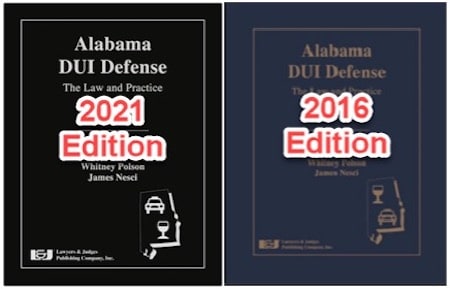 Whitney and his co-authors recently updated the Alabama book in its second edition, which was published in 2021. This DUI law book focusing on Alabama DUI laws has become the "must have" guidebook for other DUI lawyers in Alabama.

The top 5 questions that new clients ask the criminal justice attorneys in our DUI legal group are:

The two partners at the Polson Law Firm travel statewide to defend those in need of their legal assistance. Due to their prior seminar presentations on DUI laws in Alabama, the two Alabama lawyers have helped educate other Alabama attorneys for decades.

Plus, both are also known for their representation in a variety of other types of criminal cases. Mark has handled hundreds of sex crimes cases in courts across Alabama, as well as many complex domestic violence cases that can threaten a person's job, gun rights and overall future.

For a FREE lawyer consultation, call today at our main office. (205) 871-8838, or use our toll-free number at 1-844-776-5766, which spells 1-844-POLSON. When accused citizens have one chance to win, they need to trust the decades of experience of industry-leading Alabama DUI lawyers with the Polson Law Firm.